Found kittens?
Here's where to start

TOGETHER WE MADE LA A NO-KILL CITY

Back to News Home

It’s official and I couldn’t be happier: Los Angeles has entered the ranks of our nation’s no-kill communities as the largest such city in the country!

After many challenging, inspiring, grueling, heartwarming, tear-jerking, life-changing years of working to take the city of Los Angeles from a place where only 56% of dogs and cats were making it out of shelters alive to the biggest no-kill city in America, the NKLA (No-Kill Los Angeles) Coalition and animal lovers throughout the city have succeeded in boosting the city over the no-kill threshold.

I can’t even begin to describe how huge this is. Los Angeles is the second most populous city in the entire country, and now has become the most populous, geographically largest and most racially and economically diverse city to become no-kill.

Our work in L.A. began in 1991 as one of our first outreach programs. When we launched NKLA in April 2012 after 18 months of organization and analysis, Los Angeles Animal Services (LAAS) was taking in about 56,000 animals per year and only about 33,000 were making it out alive. That meant that 23,000 dogs and cats were being killed and, significantly, 7,000 (almost one-third) were neonatal kittens. That fact gave rise to the largest neonatal kitten program anywhere, ever. Since 2012, 70,000 dogs and cats have come through NKLA programs alone.

The achievement of NKLA, a Best Friends initiative, represents 10 years of passion, commitment, blood, sweat and tears by LAAS, coalition partners, the people of Los Angeles and beyond. So, to each and every organization and shelter worker, every adopter and foster caregiver, and every advocate, I say congratulations and thank you.

Most important of all, this work represents cumulatively hundreds of thousands of animals saved, and tens of thousands more saved every single year. We began with a steering committee that included seven other organizations: Angel City Pit Bulls, Downtown Dog Rescue, FixNation, Kitten Rescue, Los Angeles Animal Services, Michelson Found Animals Foundation and Stray Cat Alliance. These dedicated groups were the seeds of a coalition that has grown to include more than 140 members committed to transforming L.A. into NKLA.

But wait, there’s more. One of the biggest obstacles to moving the needle on save rates in L.A. city shelters was an injunction imposed by a state court that prohibited LAAS from providing, supporting or disseminating information on trap-neuter-return (TNR) services for community cats. TNR, in its various configurations from individual community cat caregivers to large-scale return-to-field programs operating in coordination with animal services, is the only effective and humane management protocol for stray and free-roaming cats.

The injunction meant that for the past 11 years, the city could not proactively spay or neuter community cats nor could the voucher program be used by private individuals to help stray cats in their neighborhood. It’s why the number of kittens in shelters went through the roof and why the NKLA Coalition was fighting for no-kill with one hand tied behind our back.

Long story short, the injunction was the result of a suit filed against the city by a wildlife group opposed to TNR. The group claimed that the city needed to comply with the California Environmental Quality Act and pull together a citywide environmental impact report (EIR) on the effects of spaying and neutering community cats. The judge supported their view and the animals suffered for it.

Now, after 11 years, the city has completed the EIR and we are looking forward to a new day for community cats. This is a big win for the animals and another thing to celebrate as we toast the lifesaving achievement of the NKLA Coalition and the city of Los Angeles.

Together, we will Save Them All. 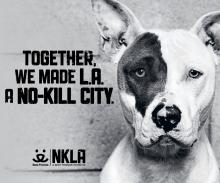